Tijuana is the western-most city in Mexico. Home to nearly two million people, it is Mexico’s sixth largest city. Together, Tijuana and the greater San Diego region form the largest metropolitan area on the US-Mexico border with more than five million people. Tijuana is home to a large number of multinational companies that specialize in producing medical devices and televisions and in assembling a great variety of manufacturing goods. Tijuana is also a land of migrants, from all over Mexico and Latin America, which gives the city its diversity and welcoming feel. However, this has also led to the city’s greatest challenges: rapid and unplanned urban growth, and pockets of high poverty levels throughout the city. Tijuana´s influence in Mexican cultural life is due to its booming economic and artistic development, and also because Tijuana is the most visited border city in the world, with approximately 50 million people crossing the border between Tijuana and San Diego every year. Tijuana is also known for its great culinary offerings, ranging from traditional Mexican, Tex-Mex, Asian-Mexican, and the local Baja-Med cuisine, which is a hybrid between Mexican, Mediterranean and Spanish styles. 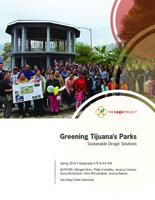