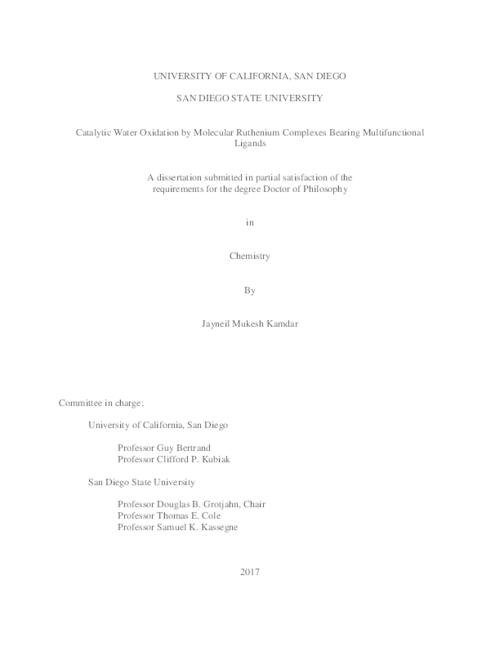 Global concern about the long-term sustainability and environmental impact of burning fossil fuels has prompted widespread research on alternative fuels. Hydrogen is attractive as a chemical fuel because it is carbon-free and therefore its exothermic reaction with oxygen does not generate CO2 as a byproduct. Large scale implementation of hydrogen, however, depends on efficient and clean production of hydrogen from non-fossil sources. Splitting water with sunlight is often considered the “Holy Grail” of a sustainable hydrogen economy, however the greatest challenge towards achieving this goal is in lowering the high kinetic barrier of the water oxidation half reaction. With the right electronics and geometry of coordinated ligands, transition metals can effectively mediate the loss of 4 e/ 4 H+ required to oxidize water. This dissertation details the syntheses, characterization, and reactivities of three novel catalytic systems containing multi- functional ligands that appear to have a marked effect on catalysis. Chapter 2 details the synthesis and reactivity of novel ruthenium complexes bearing 2,2’- bipyridine ligands with various pyrazolate groups in the 6,6’-positions. The structures of these complexes were characterized by NMR spectroscopy and x-ray crystallography and for one of the complexes, the unique solvatochromic and acid-base properties involving the uncoordinated nitrogen atoms of the ligand were investigated by non-aqueous and aqueous UV-visible spectroscopy and electrochemistry. Rapid O2 evolution was witnessed under acidic conditions in the presence of CeIV. While the apparent rates (between 3 and 4 s-1) are in the upper range of rates observed for ruthenium-based molecular catalysts, lag periods observed for 1 – 1.5 min prior to O2 production may be indications of slow catalyst dissolution or activation, or of catalyst modification. Alternatively, CeIV may have a non-innocent role during catalysis by interaction with the uncoordinated nitrogen. Chapter 3 details the synthesis and catalysis-relevant properties of two novel ruthenium complexes, [Ru(2,2’ bipyridine-6,6’-diphosphonato)(pic)2] (pic=4-picoline) and [Ru(6,6’- diisopropyl-2,2’-bipyridine-6,6’-diphosphonato)(pic)2]. These complexes are the first examples of water oxidation catalysts deliberately bearing phosphonate groups positioned to serve as metal- bound ligands. They have been characterized by NMR spectroscopy, elemental analyses, x-ray crystallography, cyclic voltammetry, and UV-visible spectroscopy. From electrochemical data, we have discovered that charge states of P-OH / P-OR groups have a significant influence on redox and catalytic properties, features that are absent in much more commonly studied carboxylate analogs. Chapter 4 details the synthesis and reactivity of a series of ruthenium complexes bearing novel 2,2’-biimidazole-4,4’-phosphonate ligands. Surprisingly, the new ligands did not participate in the intended tetradentate coordination, but instead bidentate N,N’-coordination, placing the phosphonate groups in the secondary coordination sphere to engage in hydrogen bonding interactions with two aquo ligands. The presented complexes have been characterized by NMR spectroscopy, x-ray crystallography, and cyclic voltammetry. Qualitative and quantitative oxygen evolution studies (from cyclic voltammetry and addition of excess CeIV, respectively) have shown a dramatic improvement in catalytic rates compared to those of previously reported Ru diaquo complexes. Our working hypothesis to explain the superior catalytic activity includes involvement of the phosphonates in the secondary coordination sphere potentially as basic proton-relaying functionalities.