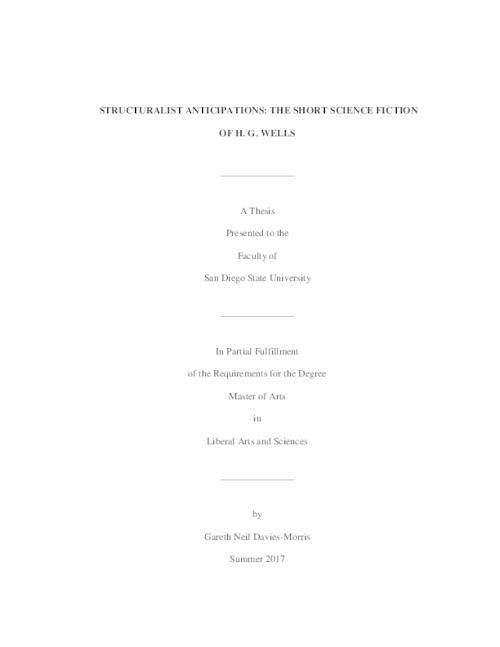 This thesis is in two parts. First, I offer a brief biography of H. G. Wells that describes his Victorian origins and early literary accomplishments, his ascension to a world stage and the celebrated interview with Joseph Stalin, his dualistic politics and personal life, and the redoubled efforts of his twilight years to evangelize for the World State. Second, I present a literary critique developing the argument that in the short science fiction stories, mostly dating from Wells’s late-Victorian breakthrough and the period of Edwardian success that followed, he develops his plots using a system of binary oppositions anticipating aspects of structuralism. Building on a range of fictional settings that I label exotic, prosaic, heterotopic, homotopic, and chronotopic, the author juxtaposes physical oppositions in culture, geography, spatial and temporal location, and action, his characters and props mediating the juxtapositions. His protagonists repeat experiences involving ironic reversals of fortune. Characters undergo transformation through the influence of a novum, a disruptive, invasive presence or technology. Such metamorphoses range from modifications of appearance to changes in personality or ideology. Wells then structures his narratives by intellectual oppositions. Dual narrators recount conflicting versions of the same events; compounding this unreliability, the narratives are diegetic, containing embedded accounts by other characters, and dialogic, using Bakhtinian double-voicedness. Paired characters further plot development through their complementary or contradictory actions while embodying, and subverting, stereotypes. Hostile characters engage in dialectical arguments, the antagonist seeking to dominate the protagonist intellectually, whether through Platonic dialogue or Lyotardian différend. Wells also makes race and species contrasts involving perceptions of Otherness and links story elements intertextually to works elsewhere in his oeuvre, as well as to other works of art and literature. Along with the short stories, this thesis addresses a few of Wells’s many novels where relevant, in particular his 1906 work of utopian science fiction, In the Days of the Comet. My research builds on the Wells scholarship of John Hammond, John Huntington, Frank McConnell, Patrick Parrinder, Darko Suvin, and others, but I believe that in the various structuring devices identified, I have achieved an original interpretation.